Phuket (Thai ภูเก็ต) (formerly known as Tha-Laang or Talang) is one of the southern provinces (changwat) of Thailand. Neighbouring provinces are (from north clockwise) Phang Nga and Krabi, but as Phuket is an island there are no land boundaries. The island is served by Phuket International Airport, located in the north of the island. The ph of “Phuket” is an aspirated hard “p”, not a soft “f”, so the name is pronounced (roughly) “Pew-get”. The name Phuket is derived from the word Bukit in Malay which means mountain or hill. Before that its old name was Ta-lang (in Thai): The word is derived from the old Malay “Telong” which means “Cape”, which is still in used for one of the main districts in the Phuket area.

Phuket is the biggest island in Thailand, located in the Andaman Sea, southern part of Thailand. The island is mostly mountainous with a mountain range in the west of the island from the north to the south. The mountains of Phuket form the southern end of a mountain chain, which ranges for 440 km from the Kra Isthmus. The highest elevation of the whole Phuket chain is the Khao Phra Mi with an elevation of 1138 m., however the highest elevation on the island itself is Mai Tha Sip Song (Twelve Canes), at 529 m above sea level. Looking north from Sunset View Point over Kata Noi Beach, Kata Beach and Karon Beach. 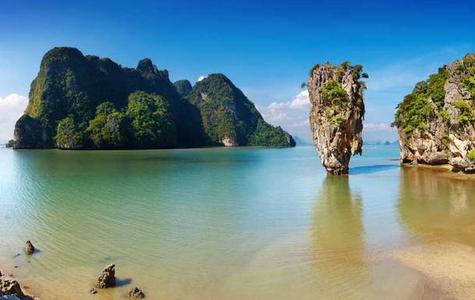 70% of the island is covered by forest. The western coast has several sandy beaches, while on the east coast are more muddy beaches. Nearly the southernmost point is Laem Promthep (Brahma’s Cape), which is a popular sunset viewpoint.

In the mountainous north of the island is the Khao Phra Thaeo Wildlife Sanctuary, protecting more than 20 km² of rainforest. The three highest peaks of this reserve are the Khao Prathiu (384 m), Khao Bang Pae (388 m) and Khao Phara (422 m). The Sirinat National Park on the northwestern coast was established in 1981 and protects an area of 90 km² (68 km² marine area), including the Nai Yang beach where sea turtles lay their eggs.

One of the most popular tourist areas on Phuket is Patong Beach on the central western coast, perhaps due to the easy access to its wide and long beach. Most of Phuket’s nightlife and its cheap shopping is located in Patong, and the area has become increasingly developed. Patong means “the forest fulled of Banana leaves” in Thai.

Other popular beaches are located south of Patong. In an counter-clockwise direction these include Karon Beach, Kata Beach, Kata Noi Beach, and around the southern tip of the island, Nai Harn Beach and Bang Tao Beach. These areas are generally much less developed than Patong, and sought out by individuals, families and other groups with a preference for more relaxed and less crowded environs than Patong.

Tin mining has been a major source of income for the island since the 16th century. Chinese Businessmen, and Chinese workers were employed in the mines- mostly are Hakka Chinese, and their influence on Phuket culture and cuisine can still be felt today. With falling tin prices, the mining has now all but ceased. Nowadays, Phuket’s economy rests on two pillars: rubber tree plantations (making Thailand the biggest producer of rubber in the world) and tourism.

Since the 1980s Phuket has become one of the major tourist attractions of Thailand, and most of the sandy beaches on the western coast of the island have been developed into tourist centers, with Patong, Karon and Kata being the most popular ones. Along with its stunning beach, and picture-perfect landscape, the increase in tourists has been amazing. Since the 2004 Tsunami, all broken buildings and attractions have been repaired.

The most significant event in the history of Phuket was the attack by the Burmese in 1785 after king Taksin had fought them back. Sir Francis Light, a British East India Company captain passing the island, sent word to the local administration that Burmese forces were preparing for an attack. Kunying Jan, the wife of the recently deceased governor, and her sister Mook then assembled forces. After one month of siege the Burmese had to turn back on March 13, 1785, and the two women became local heroines, receiving the honorary names Thao Thep Kasatri and Thao Sri Sunthon from King Rama I.

During the reign of King Chulalongkorn (Rama V) Phuket became the administrative center of the tin-producing southern provinces. In 1933 the Monthon Phuket was dissolved and Phuket became a province by itself. Old names of the island include Ko Thalang.

On December 26 2004, Phuket and other areas on Thailand’s west coast suffered extensive damage when struck by a tsunami caused by the 2004 Indian Ocean earthquake. Waves destroyed several highly populated areas in the region, killing as many as 5,300 people nationwide, and tens of thousands more throughout the wider region. As many as 250 people were reported dead in Phuket, including some foreign tourists. Almost all the major beaches on the west coast, especially Patong, Karon and Kata, sustained major damage, with some damage also being caused to resorts and villages on southern beaches.

However, by February 2005 most undamaged resorts were back in business, and throughout 2005, life slowly returned to normal for the people of Phuket. As of November 2005, following stenuous recovery programs, there is very little obvious tsunami damage remaining other than at more remote beaches, and the tourist business which drives the Phuket economy appears to have almost fully recovered.

As with most of Thailand, the majority of the population is Buddhist, but there are a significant number of Muslims (5%) in Phuket, mostly descendants of the island’s original sea-dwelling people.